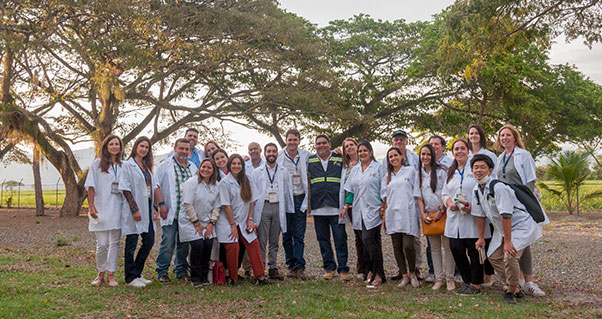 In order to bring entrepreneurs and officials from different organizations that are visiting Valle del Cauca with the Hass Avocado chain that the region offers for its production and commercialization, Pacific Fruit’s packing house was one of the strategic stops on the tour: “Connect with Buenaventura’s port and Valle del Cauca’s agroindustrial potential”.

Rodolfo Ahumada, Commercial Director for Pacific Fruits, guided the attendants through the plant and gave them details about the thorough process that has to be followed to pack the fruit that is currently and mainly exported to Argentina, USA, Perú and Europe (market where 95% of its production is exported) to date.

During the tour, Mr. Ahumada announced that for October the 22nd they are expecting to close a deal with Japan to start exporting there. Also, he highlighted that thanks to the Avocado World Congress that recently took place in Medellin (and for the first time in Colombia) “the investors and people in general already see the country with a higher potential for the production and export of Hass avocado”.

Pacific fruits is the third export company in Valle del Cauca and counts with its production in Sevilla, El Cairo and Roldanillo. “We expect to open a plant in Ginebra and also to close this year with 2.500 containers which is approximately between 85 to 90 million US dollars” claimed Mr. Ahumada during the tour.

One of the most important achievements for this company has been to reduce, almost entirely, the rate of complaints that in its beginning started with a 25% and today is less than 1%. “ we have learned from our mistakes and that has allowed us to learn from the industry in general”.

Regarding  this, Isabela Mariño, Procolombia’s manager for Valle del Cauca, pointed out  that “this kind of companies, that have already made a learning curve help so that other companies that follow this path invest in the growth and export of avocado with a strategic look such as Pacific Fruits, since these are the great lessons that must be given in the region”.

Mrs. Mariño, additionally, raised awareness on the Benchmark Exporter program whose objective is to bring companies interested in similar businesses or from the agricultural field and pointed out as feasible Pacific Fruits participation as “an example so that we can come together to teach these lessons to the rest of the entrepreneurial network in Valle del Cauca”.

This tour, integrated by 20 officials and entrepreneurs, from different organizations from Japan, Korea, Poland, Germany, Belgium, Spain and Colombia, is organized by Invest pacific, sponsored by ProColombia and in alliance with entities such as Valle del Cauca’s Governor’s Office, The Regional Competitiveness Commission, The Chamber of commerce in Buenaventura and Buenaventura’s Port Society.