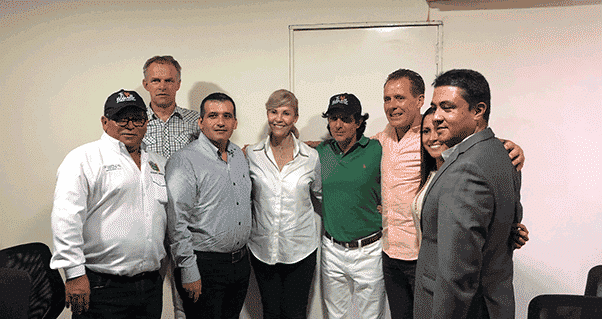 Valle del Cauca is still an attractive region for the investment of foreign companies that find it as the ideal place to expand their business, thanks to all its given conditions of weather, soils, and qualified man power.  This time, the leading Dutch company in flower production: Florius Flowers announced its establishing on the cities of Roldanillo and El Dovio, where high export quality flowers will be farmed.

The establishment of this important Dutch company, that has more than 20 years of experience in the market will create an important amount of jobs in the region, since each farmed hectare will create ten direct positions for villagers of neighboring areas.

Altogether, 100 hectares will be cultivated, which translates in 1.000 direct employments for the department.

As announced by Bas Vloet, Florius Flowers Director, when he said: “We plan to launch operations by mid-2019, so we can have our first harvest in 2020.  In terms of manpower, we want 80% of employees to be women, just as in our farms in Africa.  Furthermore, we have thought of providing childcare service for single mothers, so they can have their children taken care of while they work”

In order to keep working by the hand with the region’s Institutionality, the company directives, along with Invest Pacific, held a meeting with Valle del Cauca’s Governor, Dilian Francisca Toro, in Roldanillo, to share about the impact their presence will cause in the area.

“These are very good news for Valle del Cauca, Roldanillo and El Dovio, and especially for the rural communities most affected by the armed conflict, seeking for working opportunities.  We have a great company that comes to settle in the department with the purpose to create employment and development for both municipalities. We are excited and will collaborate with everything necessary, both Governor’s office, and City Halls, for this company to strengthen and help strengthen employment and life quality for the locals” stated Valle del Cauca’s Governor

Besides being highly agricultural, and having qualified manpower, Roldanillo and El Dovio, also have the tools to attract important investment, being two out of 15 areas in the region regarded as ZOMAC* by its acronym in Spanish, meaning: Most Affected by the Armed Conflict Zones, having tax benefits, which encourages more companies to settle in.

Thus confirmed by Roldanillo’s Mayor: “To us the arrival of this company is very important, since this as a highly agricultural area, and with this investment we can now tell our community that we are going to create more jobs.  Also, since the city is a ZOMAC, this opens doors to several business people up north Valle, helping increase its business network in the department.  Likewise, and by the hand with Invest Pacific, we’ll recover that employment force, enhancing our communities’ quality of life”.

Florius Flowers is a Dutch based multinational, with more than 20 years of experience in the growing and export of high quality flowers.  The company has great flower farms in the African countries of Ethiopia and Kenya, from where they supply the European and North American markets.  In order to get to the Latin American market, the company directives decided to expand and settle crops in Roldanillo and El Dovio, given the suitable soil, and weather conditions of the area, among other important factors.

Another very good news for this area in Valle del Cauca comes from the Canadian company: Cannaly Corporation, with more than 25 years of experience in Medicinal Cannabis merchandizing.  The company forecasts the establishment of 17 hectares of crops on the municipality of Roldanillo, creating about 10 jobs per hectare, as pointed by the Latin American Business Director for the Company: Gilberto Iragorri, during this meeting with the Valle del Cauca’s Governor.

During the last seven years, 90 investment and re-investment projects for more than US$895 million, have come to our region, having the support of Invest Pacific, to open more than 9.000 job opportunities.  So far, in 2018, eleven important foreign projects have set their eyes in Valle del Cauca.