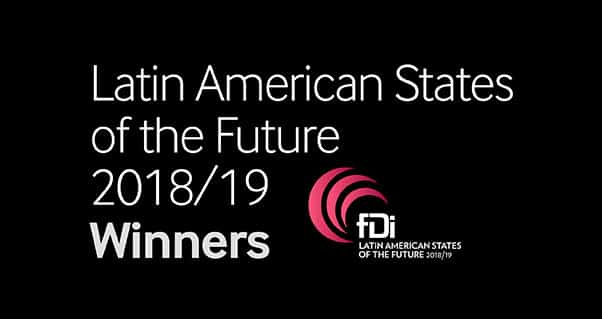 Valle del Cauca has been considered as one of the 10 regions with the best strategies to attract investment in Latin America and Colombia according to the ranking published by FDI Intelligence, a research center specialized in foreign direct investment where our department ranks 8 in the top 10.

The ranking, “Latin American States of the Future 2018/19”, where 171 regions participated in different categories was developed by FDI Intelligence, one of the most important intelligence divisions in the world in terms of economics and it is part of the well-known British journal Financial Times.

“This is positive news for Valle del Cauca which has been positioning itself as an attractive region for world players to come and settle in, they truly see a lot of potential in the department, not only to broaden their business units but also to put all their knowledge and opportunity generation as also job creation at the disposal of the region. We feel honored to see that the region is still present in this Latin American ranking”, said Alejandro Ossa Cárdenas, Invest Pacific’s Executive Director.

According to FDI Intelligence, the classification methodology in the various regions was performed based on the information collected about different foreign direct invest promotion strategies, which were assessed by a specialized group of judges that once again included Valle del Cauca within the Top 10 of the category for foreign direct investment attraction strategy.  The region also appeared in the 2014 and 2016 versions of this ranking.

In the last 7 years more than 80 local and foreign direct investment projects have arrived in Valle del Cauca bringing more than USD$825 million, creating approximately 8.000 direct jobs. This inflow has also been active during 2018 with another 10 investment and reinvestment projects in the sectors of manufacture, agroindustry, logistics, renewable energies and services, with investments surpassing USD$100 million and a forecast of 1.500 direct jobs created.

This year Valle del Cauca’s name was also mentioned in Conway’s Site Selection Magazine, where Invest Pacific was awarded as one of the best investment promotion agencies in Latin America and the Caribbean. This prestigious magazine highlighted all the hard work made by the company in order to attract foreign direct investment to the department, contributing to its development and economic growth.

Invest Pacific’s executive director stated, “All these actions demonstrate the confidence investors have in the region, it confirms the impact of economic and social efforts made by the private sector, also its leadership and institutional articulation which are driving all competitive advantages the department has”.