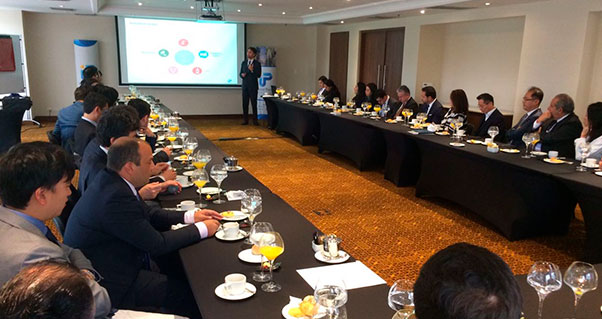 Invest Pacific organized a meeting on last July 18th, with the purpose to introduce the potential that Valle del Cauca has for the development of business projects and their responsiveness to foreign firms; this particular was intended for Korean companies.

The event gathered 42 attendees among which we found: Dr. Dilian Francisca Toro -Valle del Cauca Governor, and Kim Doo-Sik – the Ambassador of the Republic of Korea in Colombia, also the presence of high executives from the most important Korean Companies and Representatives of agencies such as FDI Pacifico, Free Trade Zones and other companies of the Region.

A variety of topics rose during this meeting, around the competitive advantages of the department, different business models and macro-projects of the region, which are meant to promote and motivate the investment from Korea onto Valle del Cauca.

At the beginning of the meeting the Governor and the Ambassador offered a speech conveying their support to this initiative that looks forward to the strengthening of negotiations and business relationships between Korea and Valle del Cauca’s companies, seeing it as an excellent opportunity for the Pacific’s development.

The Ambassador confirmed the Korean companies’ interest in the region and showed himself quite willing to continue to work with Valle del Cauca in future enterprises.  “I hope this event may be the starting point of a strong connection between Korean companies and the department of Valle del Cauca, additionally that we may have more encounters such as this one in the future” Said the Ambassador Mr. Kim Doo-Sik.

During the meeting Korean Companies were interest in different endeavors such as the modernization of the Buenaventura Port, Infrastructure work and other macro-projects of the region.  Likewise, the Ambassador highlighted the FTA signed a year ago between Korea and Colombia, which he considers the “essential foundation to increase trade and investment among both countries”.

Invest Pacific will continue generating meetings for the different representative actors of the public, private, academic, and business sectors of the countries that may show interest in Valle del Cauca as an investment destination.

Why invest in the Valle del Cauca region

Why invest in the Valle del Cauca region