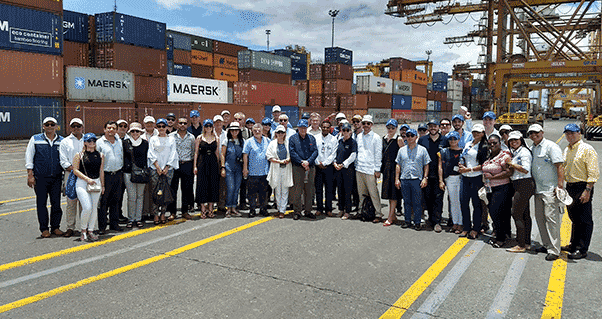 The Port of Buenaventura, the most important upon the Colombian Pacific, welcomed the visit of Ambassadors, Officials and Commercial Advisors from the European Union, during their diplomatic agenda in the region.  At that point, they were able to learn about the benefits of the Port’s geostrategic location and connectivity, moving half the Country’s International Trading in containers, achieving direct and indirect connection with more than one thousand ports around the Globe.

Invest Pacific Executive Director –Alejandro Ossa, stated during his accompaniment to this outstanding diplomatic mission, how important it is for the department to welcome this sort of commercial visits, as it is necessary to “…understand their relevance, challenges and most of all, their opportunities to trigger commerce, investment and tourism projects as well as International cooperation matters with Buenaventura”

The Buenaventura agenda began with a speedboat tour over the district’s port area, where the diplomats were able to take a close look at the Aguadulce and Port Society terminals.  They also talked about the competitive advantages, services offered, and the Port’s import and export processes.

They were able to visit The Pacific Logistic Free Trade Zone Center –CELPA- (by its acronym in Spanish), where they learned about tax and customs’ benefits offered by Free Trade Zones, as well as investment opportunities. They also visit the Pacifico University and San Antonio Citadel, from where they were shown the region’s strategic projects, on social, cultural and infrastructural matters.  This agenda, also included a scenario for meeting and conversation with social leaders and Human Right advocates.

The European Union is a strategic partner for Colombia and Valle del Cauca in terms of commercial exchange, given the whole potential of its market, and the opportunity to create strategic partnerships in technology transfer and Foreign Direct Investment.

According to the figures’ reported by Competitive Focus from the Chamber of Commerce of Cali, about the five years of commercial agreement between the European Union and Colombia, the first five months of 2018, the amount of non-mining-energy exports from Valle del Cauca to the EU, grew 9.2% a year, going from USD38 million in 2017 to USD41 million in 2018, while imports grew 9.9%.

This agenda was supported by the Buenaventura’s Chamber of Commerce and Inter-Guild Committee, and Invest Pacific.