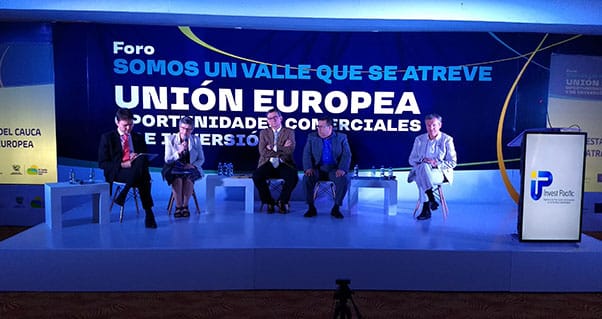 During the last seven years, more than 90 investment and re-investment projects, both national and foreign, have arrived to Valle del Cauca, 25 of which are European. All these investments have represented more than US$895 million, creating about 9.000 jobs in the region.  Information such as this was shared during the Forum: ‘A Daring Valle: European Union, commercial and investment Opportunities’ held in the city of Cali on September 27th last.

This panel called ‘Valle del Cauca’s value proposition and attracting European investment’ had the purpose to show how is the department doing in terms of Foreign Direct Investment, the motivations for European multinationals to invest in the city, and the region, as well as commercial opportunities so far this year.

“So far this year we’ve had eleven important investment and re-investment projects that had set their eyes on Cali and several other cities in Valle del Cauca.  Countries such as Netherlands, Spain and the United Kingdom, have already invested foreign capital in 2018, helping create more than 2.200 direct employments” stated Invest Pacific Executive Director.

During this time, Belgium Ambassador highlighted the good current foreign investment climate in Valle del Cauca, citing the examples of Belgian multinationals present in the region, such as Biotec, that helps Valle’s sugar production companies recycle sugar cane waste, for which it was recently awarded a sustainability prize.

In his turn, France Ambassador noted: “A good way to improve foreign investment conditions is talking to investors already settled or about to be, thus creating dialogue scenarios to listen to their suggestions and concerns, and then take actions to generate positive changes on investment dynamics” after his remark on the fact that one of the success factors between the EU and Valle del Cauca, has to do with this latter’s qualified manpower, research – institutions such as CIAT in which 27 French researchers are currently working-, infrastructure and good life quality.

More than 150 multinationals have settled in Valle del Cauca in the last 60 years, many of which come from Europe, and are still contributing to enhance the business network in the city and the department.  An example of that is Smurfit Kappa Colombia, arriving to Valle del Cauca fifty years ago, and currently developing very powerful annual investments, that bring progress while consolidating their operation our region, taking a stand as one of the most important companies nationwide.

During his intervention Smurfit Kappa’s Vice-President, explained that one of the multinational’s motivations to settle in the department was its geostrategic location: “It’s perfect! And we didn’t hesitate at all when moving all the operation to Cali; that competitive advantage hasn’t and won’t be lost. Besides, its vicinity with the Port is key, as it enables exports and widens markets in other countries”

In his turn, Cesar Meneses the General Manager of Etix Everywhere – a French company with a huge local data centers network- explained that they chose this region because of its geographic location and commercial receptiveness since “The department represents a very interesting market to us, and we find it to be a highly visible region”

The Forum ‘A Daring Valle’ was organized by the Regional Competitiveness Commission, the European Union in Colombia and Invest Pacific, with the support of Santiago de Cali City Hall, and Valle del Cauca Governor’s Office. This event held at the Intercontinental Hotel, was the official opening for the visit of the European Union’s delegation, consisting of Ambassadors and Commercial and Political Advisors.