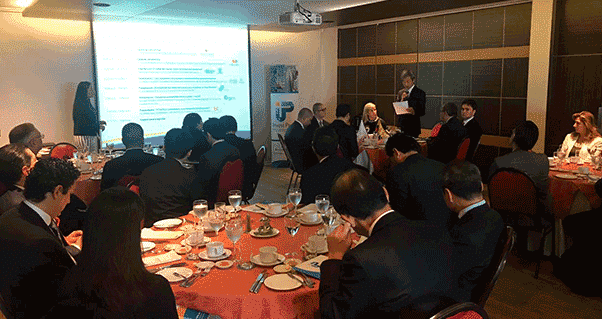 The Investment Promotion Agency for the Colombian Pacific – Invest Pacific, continues its purpose to keep on consolidating connections with foreign business people and companies, that promote the region’s development and progress.  That’s how along with the Japanese Embassy in Colombia and the Colombian-Japanese Chamber of Commerce and Industry, a breakfast meeting was held this last September with the Japanese business men settled in our country.

The meeting was attended by the Japanese Ambassador in Colombia – Keiichiro Morishita, Valle del Cauca’s Governor – Dilian Francisca Toro, the Executive Director of the Colombian-Japanese Chamber –Oscar Romero, Invest Pacific Executive Director –Alejandro Ossa, The Economic Development Secretary for the City Hall of Cali – Julian Gonzalez, The Economic and Competitiveness Director for the Chamber of Commerce of Cali – Carlos Andres Perez, as well as the Project Management Coordinator for FDI Pacific –Diego Hau, among other diplomatic officials, Japanese business men, and national entities such as Procolombia.

“These kinds of meetings are of great importance, as they offer the opportunity for Japanese companies to know more about Valle del Cauca, in order to invest in it, that is why we want to keep working with the Japanese Embassy and the department’s institutions to keep strengthening relationships” Stated the Japanese Ambassador in Colombia, after pointing this meeting as an opportunity to continue promoting development in Colombia and the region.

During this space the audience was spoken to about the competitive advantages our department has to offer, such as its geostrategic location, Buenaventura port’s connectivity and infrastructure, and the great productive potential that make it an excellent platform for Asia-Pacific markets.

“Japan has been a strategic partner for Colombia and Valle del Cauca in terms of trading, investment and cooperation, which pushes us forward to collaborative actions to enhance all that economic and business openness potential toward that side of the world” stated Invest Pacific Executive Director –Alejandro Ossa Cardenas.

According to information provided by the Colombian – Japanese Chamber, Japan has been a strategic partner for the country, as it currently is the main issuer of Direct Foreign Investment in the Asia-Pacific region, with an investment share of 47%.  Additionally, Colombia’s exports to Japan increased 30% in 2017, compared to the former year, and Valle del Cauca’s ranked a 9.5% exceeding those of other regions such as Antioquia and Bogota.

Also, according to the Embassy of Japan, currently in Colombia, there are about 90 Japanese Companies, including subsidiary offices, agencies, manufacturing, machinery and equipment companies, financial venues, among others, which has help consolidate an even stronger business network in the country and the department of Valle del Cauca.