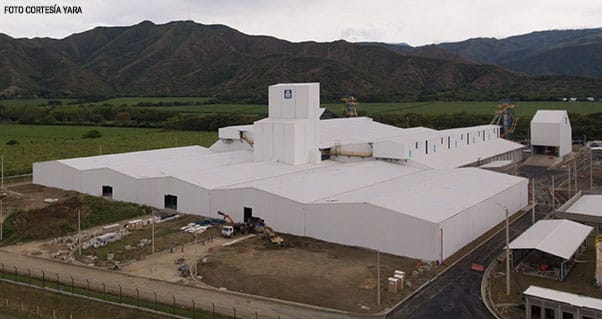 The Norwegian company, world leader in production and commercialization of nitrogen fertilizer, that believes in the rebirth of agriculture with the opening of Yotoco Valle Central, a last generation facility for warehousing, mixing, packing and shipment of Premium fertilizers.

The Company that settled in Colombia 26 years ago is present in 16 countries of Latin America with its regional hub located in Bogota.  Yara offers solutions for crops’ nutrition and focuses on promoting profitability to farmers through knowledge, quality and productivity, as well as programs to mitigate climate change.

“Currently, Yotoco Valle Central is Yara’s most important infrastructure project in Latin America (except for Brazil) with an investment of more than USD$35 million.  This new operation reaffirms our commitment to rural economy development in Colombia.  We are increasing our installed capacity to facilitate farmers’ access to new vegetable nutrition technologies” Stated Marcelo Altieri, General Manager for Yara Colombia.

The new facility will enable the company to centralize its mixing and distribution operation in the same place with access through the main roadways to the north, south and central part of the Country.  Its construction started in 2016 and will start operations by the end of this year.

It is important to mention that the project’s automation technology will optimize the levels of industrial and occupational safety for the factory staff of 130, and it will also develop a higher degree of technical skills on activities related to fertilizer management.

In the same way, Felipe Jaramillo, Chair of Pro-Colombia, states that “this new fertilizer facility provides benefit to Colombia’s potential as the world’s agricultural pantry; where its operation will contribute to optimizing our farmers’ work, with inputs for a greater productivity and lower loss, thus creating better income.  This is the kind of investment we are looking for the competitiveness of our land.  We celebrate Yara’s continuous trust in Colombia”.

Today the agricultural sector plays a main role in the growth of the Country’s economy, as it is considered the third sector that promotes the most employability in Colombia (3.5 million people or 16.3% of the national economy) after sectors such as commerce, tourism and services.

Also, Alejandro Ossa, Invest Pacific Director, said: “We are very happy to have Yara in Valle del Cauca.  Its arrival represents the rebirth of the Agro-Industrial and Agricultural sector in a region that given its competitive advantages and strategic location is attracting more foreign investment to different municipalities, as it is the case of Yotoco.  Therefore, we keep on consolidating the Colombian pacific region as an open door for high impact projects that generate development and industrial capability, while enhancing the Country’s productive apparatus as well as that of other markets”

That is how Yara reinforces its presence in the Country that besides its Yotoco facility, has other projects that have been updating to strengthen their local operation, and that are currently present in Cartagena, Mamonal and the Uraba Gulf, thus complying with its corporate mission: “To feed the world responsibly and protect the planet”.