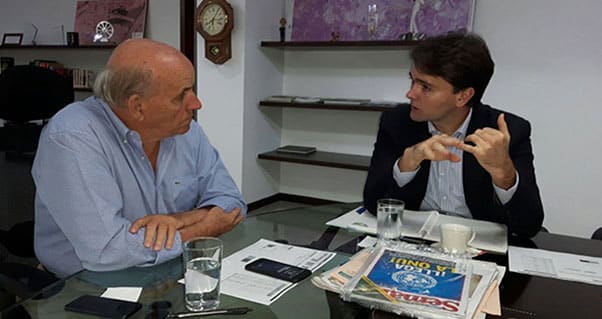 “We must create the best environment possible for foreign investment to become a fact; we need to work from the security, economic and social environment stand point.  As long as these three aspects are functional, I am convinced people will come to Valle del Cauca” With these words Maurice Armitage, Cali’s Mayor took the floor on his perspective to attract direct foreign investment to the city and to Valle del Cauca.

All approaches were done during the meeting held with Alejandro Ossa Cárdenas, Executive Director of Invest Pacific, the agency in charge of promoting and supporting the entry of new companies to the region and shows a favorable balance of his management during its five years of existence.

The organization reports that from 2011 to 2015 provided leverage and contributed to the arrival of 31 new foreign companies to Cali, such as Avanza, Neal & Massy, Marriot, PriceSmart, D&T, NS Consultant and Telemark, among others.  The settlement of these new companies, meant a local investment of 318 million dollars in Cali and the generation of 4.287 jobs which helped decrease unemployment in the city.

“It is about new and formal employments in Cali, mostly in the service and manufacturing sectors, which becomes a dynamic strength for the city” said Invest Pacific’s Director, whom also shared with Mayor Armitage about the goals the Agency has for Cali in terms of investment attraction.

“Our aim for this 2016 is to contribute with the entry of at least 16 new companies to the region with an estimated investment of USD$72 Million and we expect them to generate 540 new jobs” said Ossa Cárdenas.

The Agency also plans to provide leverage to the City Hall in the partnership between cities mostly focused in Asia Pacific, with strategic populations for Cali and the Department, looking to attract businesses as well as technology transfer, cultural exchange and the academia with these partnerships, that allow stronger connections and to have an impact in the region’s development.