Invest Pacific continues to stay connected with the investment, seeking to generate more jobs for the region 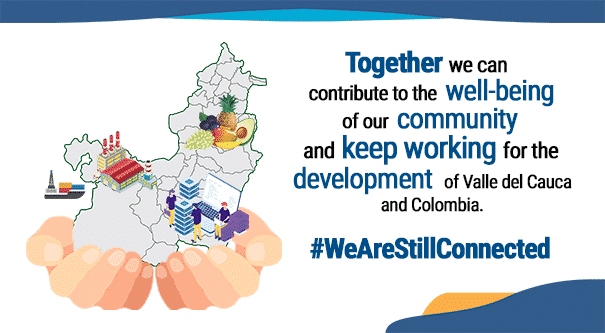 • The regional Agency plans to reach 13 foreign direct investment projects at the end of 2020, estimating the creation of 1,300 new jobs for Valle del Cauca that can contribute to overcome the crisis generated by the Covid-19.

• Through the Campaign #WeAreStillConnected, the Agency makes its actions visible for the promotion of investment and accompanies the foreign companies present in the region, highlighting their efforts to continue operating.

Invest Pacific, the investment promotion agency of Valle del Cauca, continues to prepare for the new challenges to further boost investment in the region, thereby contributing to its economic recovery after the Covid-19 pandemic. To make this possible, the entity has been strengthening its promotion strategies and supporting foreign capital businessmen interested in exploring opportunities in the territory.

According to Alejandro Ossa Cárdenas, Executive Director of Invest Pacific, “a contraction in foreign direct investment is projected on a global level. That is why, as a regional agency, we are already preparing for this new outlook, in order to be able to position with greater strength our region as an ideal platform for new businesses. Also, working hand in hand with our institutions, the municipalities, the governor’s office, business network and ProColombia in the strengthening of all these capabilities and competitive advantages that allow us to move forward in the midst of this new reality”.

According to the figures estimated by the entity, at the end of this year, 13 foreign direct investment projects are expected to be achieved, which represent an amount of more than USD$61 million, and the generation of 1,300 new jobs for the region. “In order to achieve this, we have given priority to sectors such as agriculture – with hass avocado and medicinal cannabis projects-, fulfillment centers, health, home and personal care; metallurgical, IT & Software, Spanish and English contact centers, and technological services for the health industry”, added the spokesperson of the entity.

So far in 2020, four investment projects have been confirmed or established in the region with the support from Invest Pacific: the investment of a company from the agro-industrial sector (Israeli capital); a Panamanian technology company established in Cali; the reinvestment of a BPO company from Nicaragua, and a French company leader in the BPO sector with progress in its plan to generate two thousand jobs in the region.

Among the investment opportunities generated in recent weeks in the middle of the crisis, plans for expansion of the services sector, especially of technology, software and BPO stand out. A pharmaceutical company from India that has already expressed interest in arriving to Colombia, and is considering Valle del Cauca, highlighting the leadership of the region as the main pharmaceutical producer in the country. There are also other agriculture and renewable energy companies.

The Agency has been holding virtual agendas with potential investors and attending in time the requirements that they ask for in order to have the sufficient information that enables them to assess an investment decision. In addition, it has been supporting the investors already installed, responding to their needs and challenges; and through the digital campaign #WeAreStillConnected, it has been highlighting on social media how these companies have faced the crisis and have joined solidarity initiatives for the region.

Similarly, Invest Pacific has been supporting this great public-private partnership of promoting initiatives and campaigns for the well-being of the community, which at this moment demand so much solidarity.

Invest Pacific has been working for 9 years in the region. More than 119 investment projects have been supported by the Agency, which have generated more than USD$1.000 million and have contributed to the creation of around 14.000 formal jobs.