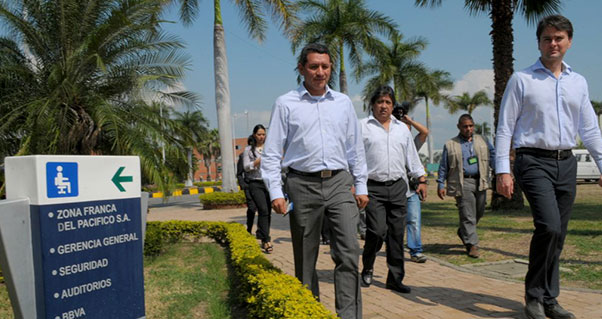 “This is a clear proof that there can be an articulated work between public and private sectors.  We are the recipients of such needs from both the companies, in this case the Free Trade Zone and the municipal management. We become the facilitator to generate a space for a more fluid communication between business people and city halls” said Alejandro Ossa Cárdenas, Executive Director of Invest Pacific.

In the meeting there came an agreement to create a work front between Pacific Free Trade Zone and Palmira City Hall aiming to achieve the passengers’ transportation to the airport, so that the Free Trade Zone will do it during certain hours hence providing a mobility solution for the local staff resident in Palmira.

“We are pleased with the positive attitude of Palmira’s Mayor toward employers and specially with his philosophy and transparent working spirit, we are grateful with his openness and are willing to keep on working by the hand with him” Said Juan Carlos Botero Giraldo, Manager of the Pacific Free Trade Zone, an industrial complex that gathers 41 companies from different economic sectors, that offer world class service, industry and logistic platforms, generating around 1,500 jobs.

Also during the meeting, it was stipulated the commitment to check payments done to Palmira for the concept of public lighting since, as mentioned by the Free Trade Zone Executives, it is a heavy contribution felt by the very industrial complex as well as by the hosting companies.  Business people do not feel any retribution from such contribution since they are liable for public lighting themselves.

Palmira’s Mayor –Jairo Ortega Samboni- in turn also committed to analyze a possible tax exception for the companies within the area, requesting as their consideration to increase the hired staff number from Palmira residents to a higher percentage.  In that sense the municipal administration and SENA, are also working to make sure the staff receives training according to the needs demanded by the sector.

For Alejandro Ossa, Director of Invest Pacific, the Investment Promotion Agency of Valle del Cauca, Palmira becomes a suitable population for the arrival of new companies, since the municipal administration has set parameters to facilitate such processes, hence stimulating capital investment for new emerging enterprises.

Mayor Jairo Ortega Samboni, announced he’d consider the requirements of Free Trade Zone’s companies and invited them to keep on believing in Palmira and generating more employment for Palmira’s residents.

Harold Zangen Janeck, President of Pacific Free Trade Zone Board of Directors, as well as Oscar Ordonez, Palmira’s Secretary for the Agricultural and Economic Development and Patricia Cuervo Entrepreneurship Director from the Municipality of Palmira, were also at the meeting.

Likewise, Mayor Jairo Ortega Samboni and the Executive Director of Invest Pacific, Alejandro Ossa, met with Unilever’s Directives with the intention of improving the conditions for new re-investments in Palmira.

AGRICULTURE FOR PEACE AT THE COLOMBIAN PACIFIC

AGRICULTURE FOR PEACE AT THE COLOMBIAN PACIFIC