In 2021, foreign and national investment increased in Valle del Cauca 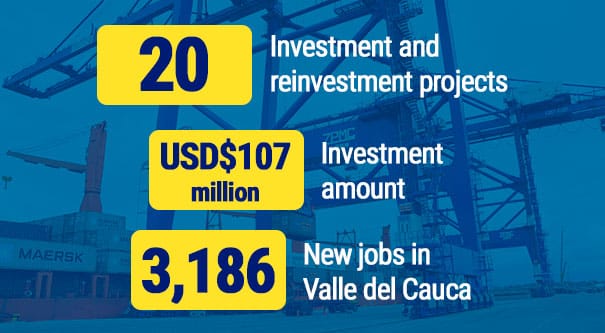 • In total, there were 20 investment projects supported by Invest Pacific that chose this region for the establishment and growth of their operations in 2021

Valle del Cauca closed 2021 with a positive balance in terms of foreign direct investment. In total, there were 20 companies with foreign and national capital that decided to establish and expand their operations in this region of southwestern Colombia, generating a growth of 25% compared to 2020. All these companies are contributing to the generation of 3,186 new jobs in the territory, and its business plans exceed USD$107 million.

This reflects management carried out by Invest Pacific, a regional entity in charge of promoting the competitive advantages of Valle del Cauca to potential investors. According to the data from the Agency, the boom in technology operations and outsourcing of bilingual BPO Contact Center services has marked the attraction of investment in the region, followed by agribusiness operations, especially for the cultivation and processing of hass avocado and medicinal cannabis. There are also distribution centers for construction materials; fertilizer production and logistics centers; packaging production plants, and research centers.

All these investments come from eleven countries: the United States, Mexico, Peru, Argentina, Chile, United Kingdom, France, Ireland, Holland and Germany. Likewise, there are investments from companies from other regions of Colombia that have seen the strengths that Valle del Cauca offers for the expansion of their operations for productive and export purposes.

85% of all these investments supported by Invest Pacific during 2021 correspond to the landing of companies that will establish their operations for the first time in this prosperous area of ​​the country. The other 15% corresponds to reinvestments by companies that are already present in the territory, but have continued to grow, as a result of the investor confidence and the business environment offered by the region.

According to Alejandro Ossa, Executive Director of Invest Pacific, “the arrival and growth of foreign capital companies in our region has been a key axis for the generation of quality formal jobs, to help diversify our export basket and to continue strengthening our broad and diverse business fabric. We are seeing very favorable results in Valle del Cauca, which are a very good indicator of investor confidence and of a region that offers all the conditions for the growth of the different productive sectors.“

Although most of these companies have established themselves in Cali, they have also chosen other municipalities such as Palmira, Buenaventura, Yumbo, Vijes, Trujillo and Villa Rica (north of Cauca). This reflects the wide range of services that the region has and how investment has reached non-traditional municipalities, contributing to their economic and social development.

During 2021 in Valle del Cauca, other investments were also announced, such as the French multinational Nexans, which publicly announced the acquisition of Centelsa, a producer of premium cables in Latin America; the Spanish investment of Bergé Vigía, which arrived at the CLIP Logistics Center to consolidate itself as a logistics terminal, for the preparation and assembly of vehicles for its operation in southwestern Colombia, and the expansion of EnfraGen with the public announcement of the acquisition of Termovalle, the most important natural gas-based power plant generator in western Colombia.

These are the companies that chose Valle del Cauca in 2021

Among the new investments supported by Invest Pacific in 2021 are: TaskUs, a North American bilingual BPO company with digital customer service solutions, which began its expansion in Colombia with its first operation in Cali. Globant, an Argentine software development company, that landed in Cali to continue its expansion in the country and is helping repatriate highly-skilled engineers and programmers. Moove It, an American software development company, located in Zonamerica that is consolidating its operations hub in Cali. Netmidas, an Irish software development company that has been consolidating in the region in recent years and that in 2021 became a key player in the city’s technology ecosystem, also promoting social projects.

Endava, a UK company that offers technology and software services, began operations in Cali at the beginning of 2021, thus expanding its presence in Colombia and repatriating qualified talent to the city. Colegium, a Chilean company that has been developing and implementing educational and pedagogical technologies for more than 20 years, started its presence in the capital of Valle del Cauca to continue growing and generating an impact on education in Latin America. Teleperformance, a French multi-channel customer experience management company, is developing its remote bilingual operation in the region, thus consolidating its presence in Cali and generating more than a thousand jobs in the region. The Silicon Partners – TSP, is an American technology services company that will establish a center of excellence for SAP consulting and Data Analytics in Cali.

Alucaps, from Mexico, is in the process of establishing its production plant for plastic and metal caps in northern Cauca. Upfield, a Dutch multinational, will strengthen its operation in Colombia with the purchase of the Unilever food plant in Cali. Menshen, a leading German multinational in packaging production, will open its plastic cap production plant in Yumbo. The Colombian company Ciclotrón is getting ready to set up a radiopharmaceutical production plant in Palmira.

The Mexican NBF has just inaugurated its new avocado oil processing plant in Palmira. Danper, a Peruvian company, is in the process of establishing Hass avocado crops in Trujillo. Disan, a Colombian company that will establish a fertilizer plant and warehouses for chemicals in Buenaventura. Breedco, a Colombian-British company responsible for producing cannabis seeds and dried flowers, will export from Valle del Cauca to more than six countries, thanks to an alliance with the American company Kinetiq Group. Aceros América, a subsidiary of Peru’s construction materials manufacturer Aceros Arequipa, has set up a distribution center in Yumbo for its products.

Among the reinvestments are reported: the British multinational Unilever, which will concentrate its operation in Colombia in a multi-category production center located in Palmira. Sanofi, a French multinational that has a plant in Cali from where it guarantees the supply of its medicines to Colombia and other Latin American countries, is now working on its second drug development center in Latin America. And finally, Encora (formerly Avantica), a leader in software development, which opened its operation in Cali in 2020, continued its expansion in 2021 and was acquired by the American group that gives it its new name, a leader in digital engineering, thus doubling its office and staff in Cali.

By 2022, Invest Pacific plans to generate 23 investment projects in the region, which can contribute to the generation of 2,540 new jobs in Valle del Cauca, and with investment amounts of USD$210 million.

The entity will be taking Valle del Cauca to businessmen from various countries, including Mexico, Peru, Brazil, the United States, Chile, European countries and also at a national level, to promote the attractions of the region for the sectors that will help to mark new investments. In services: technology and software operations, BPO and shared service centers; in agribusiness: fruit-growing companies and those related to the agro-export chain; food ingredient companies and distribution centers. In manufacturing: construction material companies, packaging and electrical equipment producers.

“We will continue to promote leadership and institutional gear, to favor this positive investment environment. Valle del Cauca is the third most economically relevant region in Colombia, contributing 9.7% of the national GDP. It concentrates 15% of the national industry and 23% of the agribusiness. We have all the conditions suitable for the development of service, manufacturing, logistics and agro-industry operations, as well as infrastructure projects, and that requires working in synergy between academia, public administrations and the productive sector”, highlighted Alejandro Ossa, Executive Director of Invest Pacific.

Among the fundamental allies of Invest Pacific for the promotion of foreign and national direct investment are the Government of Valle del Cauca, through its Secretariat of Economic Development and Competitiveness; the Mayor’s Office of Cali, through its Secretariat of Economic Development; Mayor’s Office of Palmira, through its Directorate of Entrepreneurship and Development; other City Halls, the Cali Chamber of Commerce, ProColombia, and many more guilds, companies and universities.

Valle del Cauca today has more than 200 foreign capital companies that have come from different countries in America, Europe and Asia, and that have been able to take advantage of the opportunities offered by this region in terms of competitiveness; capacity and availability of human talent; solid business network; and geographic location. It is the only multimodal region on the Colombian Pacific, it has the Port of Buenaventura and is home to seven permanent free zones, responsible for 40% of all exports from the country’s Free Zones.

Cali, a city where BPO and IT operations grow!

Cali, a city where BPO and IT operations grow!