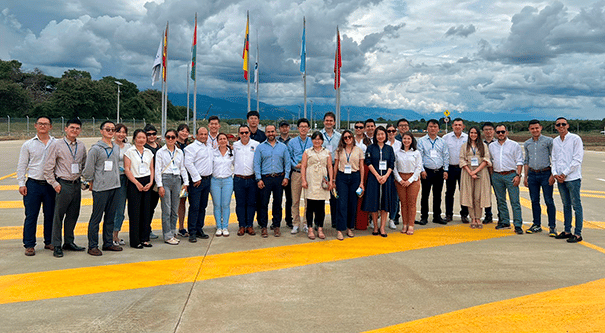 • The visit to various areas in the department helped businessmen find great investment opportunities and appreciate the region’s strategic location.

After three days of touring the various logistic and research centers, free trade zones and port terminals, as well as having meetings with members of public and private entities, the more than 30 businessmen from Chinese companies that visited Valle del Cauca ended this experience with an important conclusion: This region offers great competitive advantages to expand their enterprises, and thus attract more direct foreign investment to Colombia.

During the familiarization trip (Famtrip) called ‘A Valley that has it all for business’, the businessmen representing 21 companies, visited Palmira, Cali, Buenaventura, and Yotoco. It was a very productive journey to strengthen trust relationships between both countries, and reinforce the cost efficiency offered by the Buenaventura Seaport, the most important seaport in the Colombian Pacific.

“Valle del Cauca is open to businesses and ready to generate spaces for these companies to find the needed efficiencies to be more productive and to better bring their enterprises into our territory. We’ve been able to generate trust and knowledge, whilst showing them that Valle is an open territory for businesses, and ready to welcome foreign investment”, stated Alejandro Ossa, Executive Director for Invest Pacific.

This familiarization trip was led by Invest Pacific, the Colombian-Chinese Chamber of Investment and Commerce, the Governor’s Office of Valle del Cauca, and Palmira City Hall. In addition, it had the support of strategic partners such as the Embassy of the People’s Republic of China in Colombia, Buenaventura City Hall, the Alliance of Bioversity International and CIAT, the Buenaventura Chamber of Commerce, The Regional Port Association of Buenaventura, the Inter-guild Committee of Buenaventura, the Permanent CELPA Free Trade Zone, and the Pacific Logistic Industrial Center*– CLIP (by its acronym in Spanish*). The full participation of organizers from the public and private sectors shows that there is a coordination in pro of business.

“This visit has been a very interesting experience, because it’s given us the opportunity to see Valle del Cauca. Our enterprise consists of importing trucks from China, which arrive at the Buenaventura Seaport. Therefore, I see a great business opportunity for our company in Valle del Cauca; plus, I learnt the local government provides many investment opportunities and friendly policies”, said Gai Huawei, sales manager for FAW Group, a company in the automotive sector.

During the first day of touring, the businessmen visited the Alliance of Bioversity International and the International Center of Tropical Agriculture* (CIAT-by its acronym in Spanish*), which hosts one of the most important seed collections in the world for the preservation of vegetation biodiversity and agricultural research. This visit was partnered by the Mayor of Palmira, Oscar Escobar, and the Ambassador of the People’s Republic of China in Colombia, Lan Hu.

“For us, it is a giant opportunity to strengthen bonds between Colombia’s and China’s corporate tissue, but also with the whole interweaving that has to do with supporting innovation, technology, and science, since there is a great leverage capacity from both countries. In CIAT, we work with innovation and research from Colombia to the world, and China has helped us greatly”, stated Jesus Quintana, Managing Director for the Americas at the Alliance of Bioversity International and CIAT.

The first day’ schedule was to visit Guajira 7, Magdalena logistic parks, and the Pacific Free Trade Zone. At the end businessmen had a meeting with the Governor’s Office of Valle del Cauca, where they learnt about the strategic work being done by the territorial entity, having the participation of other department’s entities and guilds.

On the second day, the famtrip moved on with a tour to the Buenaventura Seaport and the Regional Port Association of Buenaventura, to learn about the competitive advantages of having operations near the most important maritime port of the Colombian Pacific. Chinese businessmen also toured the bay, assisted by Dimar, which allowed them to better appreciate the most important seaport terminals and connect with all logistic capacities offered by the region as a business platform.

“We are very grateful about this invitation that allowed us to see Valle del Cauca. We found that Buenaventura is a very important port for the Pacific connection, and a central location in Colombia, which promotes international trading”, stated Wei Chune, founder of WCE Consulting S.A.S.

Conversely, Marine Engineer Yu Ke, the China Harbour manager in Colombia, subsidiary company of China Communications Construction Company, which is part of the Fortune ranking 500 said: “The Buenaventura Seaport is very comprehensive, you may find various terminals for different cargo, such as containers, automobiles, and also coffee. It would be a good idea to build a railroad system to connect Buenaventura with the main cities, that would reduce transportation costs, particularly for cargo and containers. Thanks to Invest Pacific and other entities, for organizing this visit, and offer us a wonderful services. It is thanks to you we learnt we are present in Valle del Cauca, and also in Buenaventura and Cali. I hope we are able to invest here in the future”.

On the third tour day, it was time to visit CELPA Free Trade Zone, in Buenaventura, and CLIP- the Pacific Logistic Industrial Center in Yotoco. Nicolai Trespalacios, Manager of CLIP, celebrated the visit of Chinese businessmen: “It is very good they know Valle del Cauca; it gives them a real perception that the country is not only Bogota, but that there are areas we can serve them with to improve their logistic operations”.

On the other hand, Julian Quiceno, General Manager for CELPA Free Trade Zone, Buenaventura Pacific Logistic Center, highlighted the trust building process between Colombia and China, that started many years ago: “63% of cargo entering our Free Trade Zone, comes from China. We want to invite more companies to hold their logistics and international trading operations with us, this is a setting of safety and trust. Moreover, there will be great savings in logistics by being next to the Buenaventura Seaport”.

With these familiarization trips, more companies connect with all competitive capacities and advantages offered by Valle del Cauca.