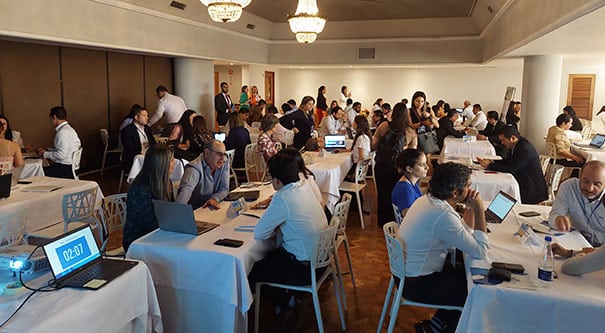 Aiming to connect the local business network with existing multinational companies in Cali, to learn about how the different enterprises have continue growing while generating employment for the region, and to appreciate the global perspective on economic matters, Invest Pacific and the Economic Development Department of Cali, held the ‘Cali Conecta, Investment and Development’ event, this past Wednesday November 9th, featuring an academic session and a Business Conference with an audience of nearly 150 attendees.

Invest Pacific is the Investment Promotion Agency of Cali and Valle del Cauca, a non-profit organization that recently celebrated its twelve years of business in the region, thanks to a collective work with the city /region’s institutions and ecosystem. It has partnered 162 investment and re-investment projects during that time, for companies that operate throughout Valle del Cauca, 48,8% of which have settled in its capital city. All these enterprises have generated nearly 19,000 direct and formal jobs for the locals (65% in Cali), and their investments have represented an amount of US$1,800 million of US Dollars.

“Cali is enjoying a great season. We have the best university of Colombia and one of the best hospitals in Latin America. For that reason, we are proud to make our twelfth year of operation at the service of the city/region; a task made possible thanks to the leadership and support of organizations, and a large network of allies. And what a best scenario than ‘Cali Conecta’, in its first version, to bring together the whole local corporate ecosystem, and multinational companies of foreign capital”, noted Alejandro Ossa, Executive Director of Invest Pacific.

Invest Pacific has partnered 79 investment projects from companies that have settled in Cali, generating 12,311 jobs in the recent twelve years, with an investment above USD$369 million of US Dollars. Most foreign projects settled in Valle del Cauca’s capital city have come from the United States, Spain, and other regions of Colombia, from companies that focused on the city’s competitive advantages, as well as its wide and diverse business network, institutional ecosystem, qualified human talent availability, quality of life, and many others.

This was 'Cali Conecta' on its first version

During the first part of the event, held on Wednesday November 9th, at Club Colombia, Munir Jalil -Economist and University Professor- posed a promising landscape for foreign investment in Colombia, stating that economy will keep on growing, and the measures taken by Banco de la Republica* (the national bank) will be able to stabilize inflation. ‘Cali Conecta’ featured sponsoring allies: Banco de Occidente, Gases de Occidente, and Comfandi.

“’Cali Conecta’ is a very important venue at an international level, and truly relevant for the region, where we can convey the businesspeople that have trusted in our city, about the existing opportunities in Cali, the challenges, and the markets they can access to, while also connecting foreign with local entrepreneurs; hence, we celebrate and are grateful that Invest Pacific is carrying out this task, and from the Economic Development Department, we will keep on fostering the continuity of these projects in time”, stated Liliana Sierra, Economic Development Secretary for the mayor’s office of Cali.

“Cali possesses an unbeatable talent, high quality, great power, leadership, and strength at a country level. It also features great academic and formative potential; In fact, it hosts the best university of the country, all of which creates a positive environment for arriving foreign companies. Its privileged location near the Buenaventura Maritime Port must not be ignored, along with other positive conditions for local and international markets”, remarked Alvaro Mazo, General Manager for Upfield Colombia.

“Genfar-Sanofi’ site has been a part of the history of Cali for 55 years, and has grown non-stop year after year”. Thus stressed by Agustin Vincent, General Manager for Genfar Colombia, one of the most important pharmaceutical production companies in Colombia, which recently launched its Genfar – Sanofi Pharmaceutical Development Center. A facility with an area of more than 600 M2 that houses formulation and analytic development equipment; it features six controlled environment rooms, and a modern lab with state-of-the-art equipment for a wide variety of analyses.

“Thanks to the strategic partnership with ICESI University, this Development Center will open possibilities for cultural and experimental exchange, toward improving talent’s health, education, and opportunities. This is a partnership that’s quite unique in its format, and we are looking to extend it”, highlighted the businessman during the discussion.

Similarly, Jose Luis Leal, General Manager for Encora Colombia, stressed that after a thorough process that considered 66 variables to evaluate and define the investment location, they chose Colombia by settling in Cali. “We carried out many assessments, and figured that both talent and potential were found here, and one of the reasons why we are in this place is because we ended this year hiring a lot of people: 150 software developers with a bilingual profile and large knowledge, all of which is quite hard to find, and so, we are very satisfied with our finding in Cali, and have been growing little by little”, stated Leal.

During the second part of the event a business conference was carried out, to promote the interaction between multinational companies, and the local business network; a unique scenario to explore new business opportunities and value connections. Among the multinational companies that attended and learned about the local offer, there were: Virutex Ilko, Accedo, Aceros America S.A.S., Emergent Cold, Encora, Fareva, Nadir Figueiredo, TaskUs, and others.

“At the business conference we were able to gather together 21 foreign capital companies who had the chance to interact, within the same venue, with such broad and diverse business network of Cali and Valle del Cauca. More than 30 local companies participated with a value proposal for foreign capital companies, thus scheduling roughly 180 business appointments from which we expect a massive response and more opportunities for our region”, concluded Alejandro Ossa, Executive Director of Invest Pacific.

“We appreciate venues such as this because they allow us to find synergies and new opportunities. We found companies with very interesting portfolios that show new added value possibilities”, explained Juan Manuel Loaiza, Administrative and Financial Manager for Virutex Ilko Colombia, a cleaning supplies manufacturing company of Chilean origin.

The Accedo Site Director, Jose Andres Parada, also stressed the relevance of the event: “Our company provides customer services for foreign companies, and this occasion allowed us to connect with other industries of the region to create strategic relationships, particularly in regards to infrastructure and human resources to continue fostering the region’s development and generating more employment”.

“This venue was of great relevance. What I liked the most was the direct contact with investors to learn first-hand about their needs”, said Pedro Pablo Ibarra, Sales Manager for Jep Mobiliari, an office furniture manufacturing company.

María Eugenia Lloreda, an attorney from the Brigard & Urrutia Law Firm, also noted the value generation this event meant for her company: “Our firm provides legal services in every practice area; therefore, the business conference led by Invest Pacific was excellent, because it was a unique opportunity to connect with the new investment that’s coming to Valle del Cauca”.