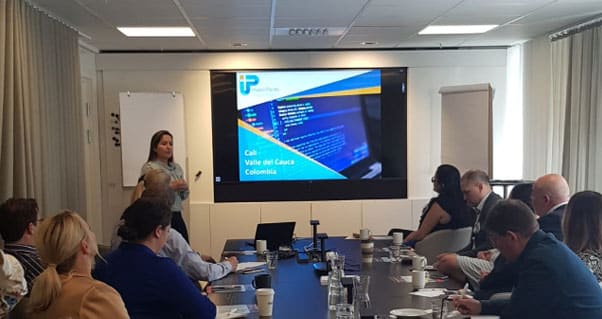 Cali is one of the most strategic locations in Latin America for investment in global services (BPO and IT & Software). Thus, in order to promote the city-region as an attractive destination for this type of projects, Invest Pacific (the Colombian Pacific Investment Promotion Agency) developed a strategic mission in the Nordic countries to encourage more global players to settle in our territory from June 11th to June 14th.

The road show, headed by the services investment manager of the Agency, aimed to promote mainly the IT & Software sector. Also, investment opportunities in the BPO industry (Business Process Outsourcing) were explored, departing from the established contact networks that have expressed their intention to invest in the region.

The agenda for this strategic mission was developed in Finland, Sweden, Norway and Denmark, countries with markets that have a prosperous and timely IT & Software business network that would be a valuable addition to the business network of the city-region. The scheduling of appointments with potential investors from these countries was supported by ProColombia, the entity in charge of promoting international trade, foreign direct investment and tourism in Colombia.

In the last eight years, the proactive performance of Invest Pacific has made of Cali a well-established epicenter for foreign direct investment. Mainly due to its comparative advantages such as an abundant and qualified human resource, a competitive low-cost frame, a geography that facilitates connectivity with other countries and the fact it is located within the same time zone of the largest IT & Software markets in the world (U.S.A. and Canada).

During the lifespan of the Agency, in the outsourcing of services, Invest Pacific has supported the arrival of 38 investment projects, generating more than six thousand direct jobs in the city-region backed by the investment of more than USD $ 28 million in fixed capital formation.

Invest Pacific has also been strengthening strong ties with BPO companies headquartered in Spain, a country with a robust Spanish-language voice BPO industry, made up of some companies that have already found in the city-region the suitable conditions to invest, such as language proximity and competitive prices.

Some of the companies that build up the global services ecosystem of the region, with the support of Invest Pacific, are Siesa, Vistex, Furukawa Electric, Etix Everywhere, Sitel and SmrtDo, among others. Those companies have come from countries such as the United States, Japan, Luxembourg, Spain and Mexico. A significant business network that demonstrates the vote of confidence that foreign investors have deposited in the territory.

What is the IT & Software sector?

The IT & Software sector is composed of two subsectors. The first is IT (Information Technology), which refers to the companies that assemble the necessary infrastructure or hardware for the proper functioning of computer technologies; such as those dedicated to produce optical fiber or data center, among others.

On the other hand, there is the software or computer services subsector that includes the software design companies in first level and the outsourcing of these operations in second place. The latter are known as ITO (Information Technology Outsourcing), which is made up of those companies that offer only the license of use of their software, for example, platforms for mass mailing or supplying of administrative management software such as CRM, web page coders, among others.