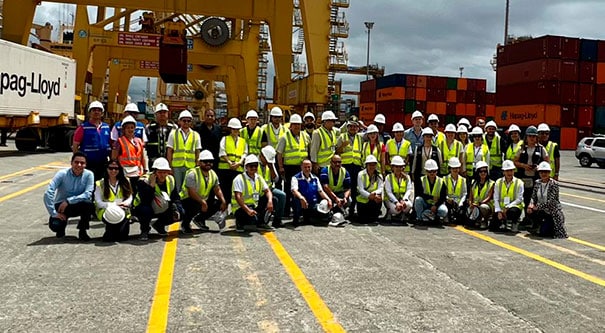 A productive two-day session was held for the 23 entrepreneurs that represented 13 Agro-exporting companies of domestic and foreign capital, who were part of the mission called “The path to the world from the Port of Buenaventura”. Thanks to their participation in panels about various topics and a sea tour around the bay, the entrepreneurs learned about Buenaventura’s competitive advantages as an exporting platform, with direct connection to more than 50 maritime ports in the world.

Attending companies work with growing and processing Hass avocado, Tahiti lemon, orange, gulupa, and flowers, said products they currently export or intend to export to several countries. Hence, they concur on the opportunities the Buenaventura Port has to offer, featuring the biggest sea port area of the country, plus moving 43% the national cargo in containers. Moreover, the department is an agricultural production leader in Colombia, with an input of 35,5% of the domestic total.

“We are very pleased to learn about all the infrastructure and opportunities Buenaventura has to offer. Within two-years’ time, we plan to set out to international markets, so we are pleased to hear about all Buenaventura has to offer”, noted Julian Perez, General Manager for Florius Flowers, a company from the Netherlands that produces summer flowers.

This event was organized by the Investment Promotion Agency of Cali and Valle del Cauca – Invest Pacific-, with the leverage of the Ministry of Commerce, Industry, and Tourism, ProColombia, and the Valle del Cauca Governor’s Office; the agency coordinated the participation through the departments of Economic Development and Infrastructure. In addition, it featured the presence of regulating bodies, namely the Agricultural and Livestock Institute of Colombia* (ICA-by its acronym in Spanish*), the Anti-narcotics Police, District authorities, Port terminal representatives, shipping and cargo agents, strategic partners, and the media.

“Just as coffee and sugar use Buenaventura as their main exporting port, we expect that soon enough, producing companies of Hass avocado, Tahiti lemon, and other products carry out their export operations from that port. Many new producers in Colombia are exporting via Cartagena, although being located within less than 200 km from Buenaventura. That is why we’ve invited businesspeople from companies of Colombia, Chile, Israel, the Netherlands, United States, Mexico, and Peru, with an interest to export from the Pacific coast, to this tour”, said Alejandro Ossa, Executive Director of Invest Pacific.

This event was a great venue to stress the importance of Buenaventura for international trading and to attract investment for our communities’ development. Buenaventura is a synonym of possibilities, due to its privileged geographic location. Overall, Valle del Cauca represents an added value for companies seeking to settle in Colombia looking to reach other markets.

During the first day of mission split panels were held in three segments: the first one was: “Current outlook to infrastructure”, announcing the soon to come construction of the two-way highway between Buga-Buenaventura, and the mention of other road construction plans to achieve better competitiveness conditions for the region and the country, led by the Infrastructure Department of Valle del Cauca.

The second segment was “Regulatory aspects and challenges”, which addressed the Persea Plan, created by ICA, for avocado exporters to reduce logistic costs and timelines during inspection, thus helping them take their product to the European Union, among other strategies. Innovative endeavors from the Anti-narcotics Division of the National Police Department were also addressed to safely expedite trading from maritime ports.

The last segment was “Buenaventura as an efficient port for Agro-exporting”, which featured the participation of representatives from the Buenaventura Inter-guilds Council, the Colombian Federation of Logistic Agents for International Trading, the Regional Port Association of Buenaventura, the Buenaventura Port Containers Terminal, the Aguadulce Industrial Port, Seguridad Atlas, Seguros Bolivar, and the Safe Companies Association, addressing the challenges, and the safety practices in the Agro-exporting chain from Buenaventura.

“We labor to maintain a fluent communication with authorities, and exporters that send their products and goods from our port. We have the technical capability to become the logistics node we want to be. Buenaventura is a land of great resilience, and we need to change every myth around the Port’s operation”, stated Juan Pablo Martinez, Operations Manager for the Buenaventura Port Containers Terminal.

The second day, attendees made a tour around the bay in a Ship owned by the General Maritime and Port Direction* (Dimar-by its acronym in Spanish*), and then made a guided tour visit to the Regional Port Association of Buenaventura* (SPRB-by its acronym in Spanish*), where they could see the cold rooms where products that require low temperature are kept prior their export, among other features of this Port Terminal.

“We are capable of serving the whole services demand from exporters of the southwestern region of the country. We have sufficient human and institutional resource, and physical infrastructure, therefore our terminals are ready and capable enough to serve the Agro-exporting industry”, emphasized Franklin Ruiz, Chair for the Colombian Federation of Logistic Agents for International Trading* (Fitac-by its acronym in Spanish*) -Buenaventura branch.

Some words by the attendees:

“We’d like to start using the Buenaventura Maritime Port, because our site is located in Palmira, hence, this port is ideal for our export operations”: Carlos Beltran, Plant Manager for Managro Fresh, an Israel born company that produces and exports avocado and Tahiti lemon.

“We are looking forward to exporting via Buenaventura, it is our natural port, since our company is located in Cali. As a company, we have always committed to fostering the exporting platform of the southwest of Colombia thus growing as a region”: Andres Rojas, General Manager for Comercializadora Maxifinca, of Colombian origin.

“We were very interested in learning about Buenaventura, as we are pursuing certification plans with ICA for exports to other destinations, such as Korea and Argentina, so this will be the perfect port. We expect to begin the soonest possible”: Sara Areiza, Logistics and Sales Director for Jardin Exotics.