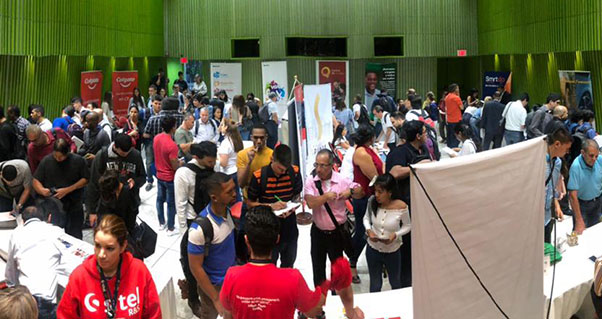 Having a human talent with bilingual skills has been a key factor in attracting foreign direct investment in Cali and Valle del Cauca. For this reason, the region is increasingly working in synergy with the public-private sectors and academia to continue strengthening these skills in English as a second language, making the territory a strategic epicenter for the arrival of more world players.

In this way of continuing to promote qualified and bilingual human talent, the city-region has different initiatives, such as the ‘Mesa de Bilingüismo ‘, a program coordinated by the Chamber of Commerce of Cali, formed by academia and other entities, which aims to contribute to the improvement of English language proficiency in Cali.

It also has other bets such as ‘Go Cali’ and ‘Go Valle’, created by the Municipality of Cali and the Governor’s Office of Valle del Cauca, respectively, teaching and appropriation projects that seek to improve English language skills in groups specifically selected from public schools in the region.

These initiatives, according to figures consolidated by Invest Pacific with the DANE source, have contributed to the fact that the Department currently has 179,518 bilingual people in levels B1 and B+, a significant amount that the installed investors highlight as added value and as a definitive factor to choose Cali and other municipalities as the ideal destination to open or expand their businesses.

Additionally, the capital of Valle del Cauca has 26 bilingual schools and also institutes for the teaching of this second language. In the last decade, the percentage of recent college graduates who reach the level of B1 or higher in English has increased, from 5% in 2009 to 16% in 2018.

One of the sectors that most attracts foreign companies that demand bilingual talent is the outsourcing of services (BPO and IT & Software). In the last eight years, with the support of Invest Pacific, 38 investment projects have arrived in Cali, belonging to this sector, representing an investment of more than US$28 million and generating more than six thousand direct jobs.

One of them is MM Research Worldwide, an UK-based market research company with presence in Oxford, London, New York, Shanghai, Singapore, Mumbai, Durban and São Paulo, which decided to open operations in Cali in April this year, inspired by the quality of bilingual human talent available in the region.

“When it came to officially having a team of our own programmers in Latin America, we were looking for different places and analyzing which location would be the best for our operations and we finally chose Cali, because we have a history of working with the programmers here and we have full confidence in their capabilities,” shared Sesha Sondur, Financial Director of MM Research.

Precisely, the company had already known about Cali’s talent in England, and it was this positive experience that led it to arrive in Cali. “We could have chosen other destinations as well, where we might had to set up an operation from scratch but as we worked with programmers in Cali before, we had full confidence that setting up a company here would be right option because we were confident about finding the right talent,” emphasized the Financial Director of MM Research.

Another case of success that highlights the quality and bilingual human talent of the city-region is SmrtDo, a company from Nicaragua, dedicated to outsourcing services for medical bills of hospitals in the United States. Since this year it has also been installed in the capital of Valle del Cauca.

“The main reason why we decided to open our operations in Cali is the human resource, very highly motivated, very well educated and prepared; it was huge factor for us. Their English is very good, they process very well, they analyze; it’s very good talent and they are very eager to work. That’s something that’s very important in our business and that was a major factor in our decision to stay here,” said Gabriel Morales, CEO of SmrtDo.

SmrtDo has two offices in the United States and began operations in Cali in January 2019 with a team of 20 people that it hopes to increase in the coming years. “Once we visited Cali, Invest Pacific was essential in assuring we had all the information we needed to be able to make a decision as soon as possible, they showed us physically the quality of human talent that there is in the region, of bilingual human talent,  who have very good English, who can really do the job much better than in other locations we’ve seen,” concluded SmrtDo’s CEO.

All this positive panorama in terms of quality and bilingual human talent, highlighted by foreign businessmen, allows the region to continue being an ideal ally to contribute to the strengthening of commercial ties with the rest of the world.