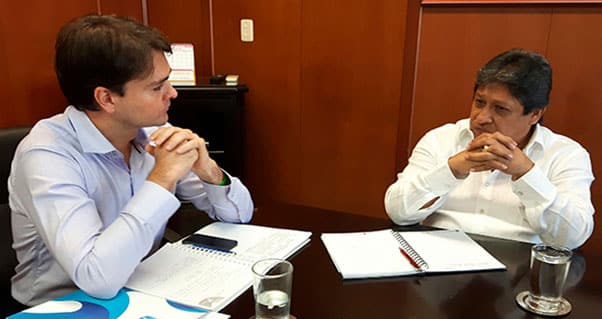 (January 20th, 2016) the Director of Invest Pacific and the Mayor of Ciudad de las Palmas met in order to find out the number of foreign companies that entered Palmira during the last five years, and to agree upon a work front to attract more investment to the city and the region.

During the encounter, Alejandro Ossa, The Agency’s director who promotes the investment both from foreign and national capital in Valle, introduced a balance of investment from companies supported by the organization to settle in Palmira during the last five years.

The report accounts the arrival of such companies as Unilever, Aptar, Ortobras, Furukawa and Instanta, which during a five-year period invested USD$154Miillion, 560 thousand dollars, generating around 300 direct employments.

Palmira’s Mayor, Jairo Ortega Samboni, acknowledged Invest Pacific performance while at the same time highlighted the meaning of the new companies’ arrival to the region: “Essential, because by bringing investors we will have economic development.  We have many opportunities, many strengths, we do have to improve in terms of security, competitiveness and we need to talk about tax incentives, we need to talk about current business people, but the idea is that the municipality can be seen as an important, prosperous place, so they can establish their companies here, as we will assist them at our best, with all quality and strength Palmira has” pointed the Mayor.

Aspects such as the airport, and the perceived need for a freeway that would connect the Region from Palmira to the rest of the East part of the Country were subjects addressed during the meeting.  “We want to maximize Palmira’s good location in our region and Country, we need to make the most with the establishment of the second most important airport of Colombia and the municipality of Palmira and want to offer the free trade zones installed in Palmira more companies to settle inside them” Emphasized Alejandro Ossa, Invest Pacific Director, whom also focused on the construction of the freeway to the East of Colombia.

“In terms of infrastructure, we believe there are excellent opportunities, we are speaking from the Chamber of Commerce and the Governor’s office about the need to create a pathway that connects Palmira and Valle del Cauca with Orinoquia, where Palmira, being the crossed road in the middle will undoubtedly play an interesting role, which will create a very good dynamic for the economy, not only for the road construction but for the new relations the department will have with other regions of the Country that were not connected before” emphasized Invest Pacific’s Director.

The development of the service sector, the improvement of the city’s overall perception of legal stability for companies, as well as the level of bilingualism, were other subjects discussed in order to improve competitiveness and attract more investment to the region.