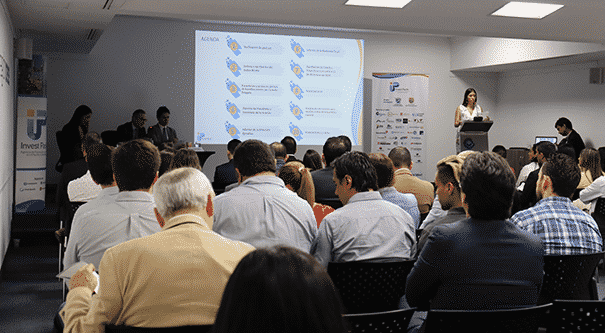 The Agency has accompanied the arrival of 85 projects of foreign and domestic investment, in Valle del Cauca and northern Cauca, between 2015 and 2019, generating more than 8,000 new jobs in the region.

Eleven travel alerts to Cali, Buenaventura and Valle have been improved with the management of Invest Pacific, in the last five years.

The Investment Promotion Agency for the Colombia Pacific – Invest Pacific- held its 10th General Meeting on March 6th, where it announced the results in terms of attracting foreign investment achieved for the region, in 2019 as well as in the last five years, within the framework of the closure of the strategic planning that the entity devised and which guided its management during the last five years.

Between 2015 and 2019, 85 investment projects were supported directly by Invest Pacific, which reached amounts of USD$635.1 million and generated more than 8,000 jobs in the region. These results led to a general compliance of 103% on the goals that the Agency established to reach for that period of time. In total, there were 16 towns in Valle del Cauca and 2 of northern Cauca where companies from various countries were established (see map of investments).

“There is a great enthusiasm from the investors, who see great opportunities for growth in the various towns in the region. This is very significant, taking into account that the territory offers an extensive network of services and human resources in its various cities and towns, which has favored the establishment of operations in areas that were traditionally not recipients of investment, as El Dovio, Roldanillo, Caicedonia, Guacarí, Yotoco, Bolívar, among others,” indicated Alejandro Ossa Cárdenas, Executive Director of Invest Pacific.

It is also worth mentioning that, in the last five years, Invest Pacific has intensified its management for the decrease in travel alerts, seeking to permanently improve the investment climate in the region. Thus, between 2015 and 2019, eleven travel alerts were improved, thanks to a joint work developed with the Mayoralty of Cali and the Governor’s office of Valle del Cauca.

Invest Pacific is the regional entity that accompanies and advises, at no cost and under confidentiality levels, the investors in their decision-making process of establishing in the territory, in a cohesive exercise with the public sector (Governor’s Office of Valle del Cauca, Mayoralty of Cali, Palmira, Yumbo and Jamundí among others); companies and trade associations in the region, and of entities of the national order, such as ProColombia. It initiated operations at the end of 2010, consolidating more than nine years of work in Valle del Cauca.

Results of Invest Pacific in 2019

With respect to 2019, Invest Pacific supported the establishment of 18 direct investment projects, which represented the amount of USD$171 million and the generation of 1,711 new sources of formal work. Of these, 11 correspond to the installation of new foreign companies, and 7, to reinvestment of foreign and domestic companies already installed, which shows the growth of the operations in the region.

The five main sectors recipients of investment were: agribusiness (particularly in hass avocado and cannabis) with a contribution of 27.4%; logistics (in-house supply centers) providing 15.4%; plastic products (specialized in packaging) with 15.3%; electrical equipment (both batteries and fiber optics) contributing with 12.8%, and outsourcing of services (especially KPO’s) generating 12.4%.

Some of these 2019 investment projects to be highlighted are: Solinftec, Brazilian company leader in the technology sector applied to the agribusiness, that serves from Cali the Colombian and Latin America market. Camposol, the most important agricultural exporting company from Peru and the largest producer and exporter of hass avocado in that country, which expanded its investment in Valle del Cauca with the acquisition of more land in Roldanillo. Alpla, an Austrian company, world leader in the development and production of plastic packaging solutions, which is building a new plant in Yumbo (Valle del Cauca).

It should also be noted that, thanks to all this positioning work of the region, other investments also arrived to Valle del Cauca (mainly in business acquisition). In this way, Valle del Cauca closed the year 2019 with a total of 25 projects -18 of these were supported by Invest Pacific-, between new investment, reinvestment and acquisitions of companies, which accounted for USD$868 million in capital to the region and the generation of 2,896 jobs.

The 10th General Meeting had the presence of members of the Board of Directors, founders, contributors of the Agency, strategic allies and special guests, who contribute each day to the promotion work of direct foreign and domestic investment promoted by Invest Pacific.