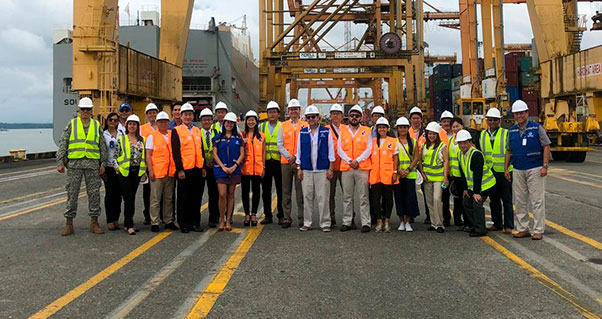 In its first visit to Buenaventura and after the improvement in the travel warning made by the Embassy of Japan for this area of the country at the end of 2018, a prominent delegation of Japanese businessmen, members of the Mokuyo-Kai association, visited the region in March, with the accompaniment of Invest Pacific, to explore first-hand the competitive reasons, explore investment opportunities and continue strengthening commercial ties with Valle del Cauca.

The delegation of Japanese businessmen that participated in this agenda was formed by executives of the following companies: Mitsubishi Colombia, Toyota Tsusho from Colombia, Mitsui Sumitomo Insurance, Marubeni Corporation, NEC from Colombia and MUFG Bank. Also participating were the Embassy of Japan in Colombia, the Japan Trade Office -JETRO, and the Cooperation Agency of the Government of Japan -JICA-.

The agenda with these businessmen began in Cali, with a networking space with the participation of Invest Pacific, the Mayor’s Office of Cali and the Governor’s Office of Valle del Cauca, where projects from the region were presented that are considered strategic, in topics such as technology, smart cities and sustainable mobility solutions.

The focus of the visit was the Special District of Buenaventura. During its two-day agenda in the main port of the Colombian Pacific, the delegation had the opportunity to take a boat tour of the port area and get to know the Aguadulce Port, the Buenaventura Port Society, and the Buenaventura Containers Terminal.

In the same way, during this strategic mission, the businessmen were able to visit CELPA, the free zone of the Port, and the Industrial Logistic Center of the Pacific -CLIP-, located in the roundabout of Mediacanoa, in Yotoco. In addition, they participated in other spaces with authorities of the District, the Chamber of Commerce of Buenaventura, the Intergremial Committee of Buenaventura, among other important local actors that supported this visit.

“This is an effort that we are making with the Mayor’s Office of Cali, with the Governor’s Office of the Valle del Cauca and with the entities of Buenaventura to further position the region before the Asia Pacific, as a strategic, safe and reliable destination for foreign direct investment. On this occasion we had a delegation of 15 people from Japan, who have identified Valle del Cauca as one of the key assets in their relationship with Colombia,” said Alejandro Ossa Cardenas, Executive Director of Invest Pacific.

Koji Tomita, president of Toyota Tsusho of Colombia and president of the Association of Japanese companies Mokuyo-Kai, said: “We are very grateful for the warm welcome of the region, it is important to maintain and continue to strengthen this relationship between the regional entities of Valle del Cauca and Japanese companies, in order to find new projects that are successful for both parties”.

Other members of the delegation, such as Takatoshi Yamamoto, first secretary of the Economic Section of the Japanese Embassy, highlighted the attention given by the different local actors. “This is the first time I have visited Buenaventura and this was made possible thanks to an improved travel alert from the Government of Japan. Thank you very much for the attention and information you have given us, I will report the success of this visit to our office in Tokyo to call the attention of Japanese investors,” said Yamamoto.

According to data consolidated by Invest Pacific, with information from the Central Bank of the Colombia, Japan is an important strategic partner for the country, as it is currently the main issuer of Foreign Direct Investment in Colombia in the Asia-Pacific region, with a 50% share of investments from that region by 2018. The importance of Japan in the direct foreign investment that arrived in Colombia in the last year grew 16% compared to 2017.

In addition, Colombia’s exports to Japan surpassed USD$474 million in 2018, being the main products exported: coffee, fuel, flowers, basic metals, and their manufactures, in addition to chemical products and food (94% of the total exported to the Asian nation). With the exception of fuels and flowers, the other products exported from the country represent a commercial opportunity for the Valle, since our industries are.